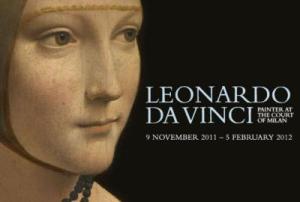 Today I attended the most eagerly anticipated exhibition of the year: Leonardo da Vinci: Painter at the Court of Milan at the National Gallery, London. Exploring da Vinci’s time in Milan from 1482 to 1499 when he became court painter to the city’s ruler, Ludovico Sforza, the exhibition brings together nine of the twenty or so paintings currently bearing his name. Leonardo started very few pictures during his lifetime, and completed even fewer. To have so many on display in the same exhibition is nothing short of extraordinary. The fact I have been waiting to see much of the work here since I was eight (when I decided I wanted to be an artist after looking at a Leonardo book at school!) added to the anticipation.

One of the key strengths of this show is that it does not seek to demystify da Vinci. Part of the joy of engaging with his work is the clandestine nature of the experience. The unfinished ‘Musician’ (also known as Portrait of a Young Man) is a prime example. As Adrian Searle wrote in his recent review of the exhibition: “The painting and the viewer are left hovering…we stand and look, and become part of the experience of looking itself, caught between one thing and the next.”

Nowhere is this more apparent than in the presentation of Leonardo’s two versions of the Virgin of the Rocks. Placed at opposite ends of the gallery, facing one another in a kind of high-end Renaissance version of Top Trumps, you can’t help but pick your favourite. However, more interesting is the way you start to dismantle da Vinci’s evolving technique and thought processes. You fill in the blanks, and create your own narrative.

When Leonardo entered Ludovico Sforza’s service in about 1489, he took the opportunity to paint his master’s 16-year-old mistress, Cecilia Gallerani. ‘The Lady with an Ermine’ is a curious work, Leonardo using the portrait to illustrate his belief that by responding to all that was most beautiful and harmonious in the natural world, painting could inspire love in the viewer. Both this painting and ‘Portrait of a Woman (The Belle Ferronniere)’ are hypnotic and unlike any paintings I have experienced before.

Elsewhere, around sixty drawings are on display. In no way filler, these works underpin and enhance the paintings. It is in these that my real passion for da Vinci lies. Leonardo never remained static, and his inability to focus on one idea for any length of time before getting distracted by some other thought process lent itself to drawing rather than painting. It undoubtedly pissed a few people off – he didn’t receive payment for his first Virgin of the Rocks for almost 25 years – but is at the root of his enduring influence on the way artists still work today.

As artists and human beings we must never stop questioning and evolving. As da Vinci said: “Art is never finished – only abandoned.”