Just arrived back from a busy week of travelling to play at two superb festivals – Burnley Blues and the Musician Blues Festival in Leicester.

Having grown up in Burnley it’s always fun to head back there and see old friends. I even managed to pop to my favourite old guitar shop and pick up a few bits and bobs (I really need to stop buying slides!) before heading to the festival for my early evening slot.

I was playing on the New York Stage, which is a tiny venue situated in Queen’s Park. Organised by OUTCRY Arts and more specifically Tess James, there was a really nice vibe with a great crowd. In fact, several chaps from Leeds had made the trip after catching one of my sets at Ain’t Nothin’ But a few months ago. Does that constitute a fan base? Maybe not…!

The set went down well, particularly the new material from the EP. Afterwards was a long drive south across what seemed like endless moorland. A dodgy headlamp didn’t help matters but I eventually arrived in Loughborough for a good night’s sleep. 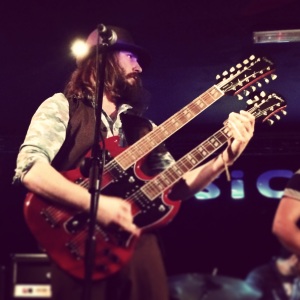 Next up was the Musician Blues Festival. The rest of my band had headed up from London for an early afternoon slot. The lineup was incredibly strong, with well know acts such as Ron Sayer and Alex McKown (both of which were excellent) playing later in the day. The promotor Chris Sims had obviously worked really hard on the day. It was a pleasure to work with her and I will definitely recommend her to other artists.

It was the first time we had played the new EP in its entirety so we were pretty pumped from the outset. ‘Get It Back’ and ‘Wake Up’ went down really well, with a special guest appearance from Stuart Moir on violin adding a little extra spice to ‘Hey, Hey, Hey’.

As always my trusted rhythm section of Jim Brazendale on drums and Rick Baxendale on bass kept it all together – no easy feat considering how much new material was played for the first time. I used my SG twin neck for the first time in about 5 years – always guaranteed to get a reaction from the audience.

As a slight aside I played both of these gigs full of painkillers as a result of spraining my wrist last week, hence the number of grimaces in the photes. Tip to musicians – it is not wise to play in goal for a 5-a-side team 5 days before a tour.

Next up is the Troubadour, London on 14 May. Hopefully see you there!